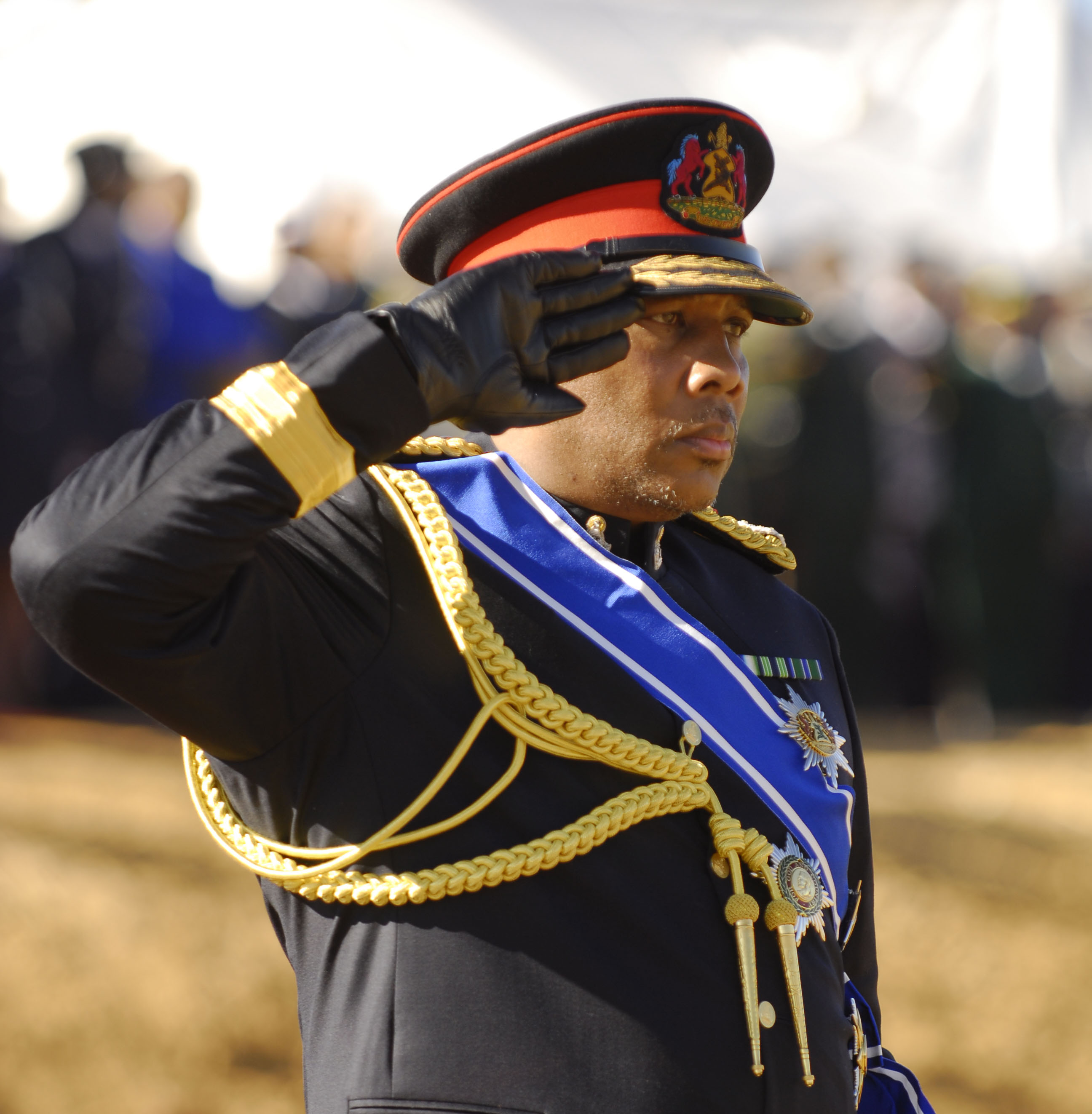 It took six months to get there but I did it.

However I did not expect to be invited to the State Banquet as a guest of His Majesty King Letsie III. Frankly I am not really the banquet type and these formal functions scare and bore me at the same time. This event was different because the people are friendly and two lovely people dragged me in by my ears.

In March 2012 some insect must have crawled into my ear and told me to get my book “Basotho People at Work” into the hands of King Letsie. Moreover I knew that there was to be a banquet in November for all of the more important diplomats from Southern Africa. In fact there were to be over 100 ambassadors, high-commissioners and senior VIP’s from as many countries. So it appeared to me, that vision of my book, in the hands of each of them as well as in those of the Basotho High Society.

The path to success was interesting and involved meeting extraordinary people; Mrs. Michele Thoren Bond, the Ambassador to the U.S.A., the most charming, friendly and relaxed ambassador that I have ever met, helped me find the right people to talk to and was so charmingly appreciative of my work. This was despite my dirty boot marks all over her pure white wool carpets. (It was snow and slushy mud time in Maseru!)

Michele’s interest in this project led to Dr. Mathase Nyaphisi, ex Ambassador to many EU countries and for a long time based in Berlin. Ntate Mathase called me several times from Europe and made many long distant calls to assist me in this endeavour.

Eventually after this long haul, I was in touch with another super lady Mrs Itumeleng Rafutho-Labuschagne, Director of the Europe & Americas section of the Ministry of Foreign Affaires and International Relations for the Kingdom of Lesotho.

Thanks to all of the calls and suggestions from all of my friends, I was able to deliver 100 books, personally to the DG on the 23rd of October.

There again the surprises continued; dressed in my safari gear, delivery boy style, I arrived at the government complex in my old landy ‘Mathubathuba’, loaded with the books. Thinking along the lines of “drop off the books and get a receipt and then bugger off quickly” ~ I arrived in the office of ‘Mme Rafutho-Labuschagne. I was charmed and was received like a VIP, despite my lack of protocol and negligent sartorial effort. Even more-so by a colleague from the Protocol Department; Mr. Japan O. Mntambo, Counsellor, Directorate of Protocol. ‘Ntate Japan was enormously helpful with my back-country approach to “society-and meeting-important-people”. Above all Ntate Japan, linguist, expert in Arabic, and fluent in many european languages gave me insights into Sesotho protocol that I could not have found elsewhere.

So when the DG returned and asked if we could take the books upstairs I thought that we going to the store room.

Ntate Japan was making me repeat the phrase~”Mohlompehi Letona Lehabane” and I did so all the while climbing the staircase to the next floor. Entering the large room at the end of the corridor I was greeted not only by the unusual sight of a Cabinet Minister holding the door for me but also by the DG and a T.V. Crew and press photographer. “Mohlompehi Letona Lehabane” I repeated automatically thanks to my Arab speaking friend. “Ke thabile o tseba”… Honorable Minister I am glad to make your acquaintance. Thank the gods for the protocol man.

The T.V. and press thing had been put together in the few minutes that Ntate Japan and I had been whiling away chatting about protocol and having tea. The Minister, Mohlabi Kenneth Tsekoa was waiting for me and we sat after the formalities and chatted about the Maluti Moutains and equestrian adventures for a good half an hour. From his leather armchair and in his very smart suit he looked at me in my togs and said diplomatically and with no doubt a little humour that he could see that I would have no problem to dress in ‘Black Tie’ so “would I mind if they invited me to the State Banquet?”

Well that was all a very great surprise. Although my sponsor were very jealous as no-one had expected this very formal meeting and handing over of the book ceremony, they were nonetheless envious. I did not care as I had made three new sincere friends.

One month later the real thing is happening. My pictures are on show at the Maseru Sun and they are sitting on the efficient little low-level easels designed by David Randel and laser cut and painted just in time for it all.

The programs are printed and the audience is arriving by the limousine load on the great day.

As this was an ‘evening affair’ and even though my rôle was to be Expo curator to a certain extent, I was sure to be confined to the foyer and not invited to the banquet. Long past were my expectations. After all a month was more than enough time for busy diplomats to forget their promises.

Well that was without counting on my good friends.

Camille Perdereau, Consul Honoraire and Directrice of the Alliance Francaise of Maseru and Petri Salo, Ambassador of Finland in Pretoria were at my side at the exhibition of my photographs. They were not having this ‘not invited thing’ and went to investigate like two member of the Famous Five. Returning only a few minutes later to embarrass me for my doubting Thomas attitude; ~ “Your name is on the list”!

So as three musketeers, arm in arm we braved the protocolary reception and eventually found our tables for the evening, unfortunately all at separate places.

“No. 23 Ntate Gosselin” said the pretty young Mosotho in the foyer. I was now without my support team and heading into the unknown. I followed the tuxedo suited usher through the maze of tables and found my place. My friends were no-where to be seen and I was un-nerved. I stood behind a chair, fuming that I should let myself into this at all. I could be in the fresh air talking to everyone about my work and not being a rag-doll here. Then the Ex-Prime Minister of Lesotho ‘Ntate Pakalitha Mosisili arrived a sat down at ‘my’ table with several friends and their wives and things began to look less miserable. Professor Teboho Kitleli, Secretary General to the Red Cross and his spouse a long standin W.H.O. Cadre sat on my left and the Director of UNICEF of my right. It was going to be an interesting evening. No one knew who I was or why I was there!

Well I spare you the detail of the delayed arrival of ‘important people’ and the tediously long speeches. Nor shall I mention the half hour prayer in Sesotho which had most foreign guests a little bewildered.

The evening began as the formalities stopped and the senior ambassadors climbed onto the stage to dance with the choir and show their solidarity with the adorable singers. The wine arrived at the table, the delicate euro-centric dishes were delectable and mercifully small. In no-time at all the singing and dancing and eating and meriment moments were over and His Majesty and entourage were making for the door, no doubt as keen as every-one of us to find the evening air. It was 12 O’clock.

All that was left was to plod along the pavement outside the venue and say one’s adieux to the rare visitors to Lesotho and the even rarer real friends amongst the departing crowd, standing there waiting for their shiny Limousines to whisk them away to who knows where.

Fortunately there are always two friends waiting in the cocktail lounge with ready night-cap of Jamesons. 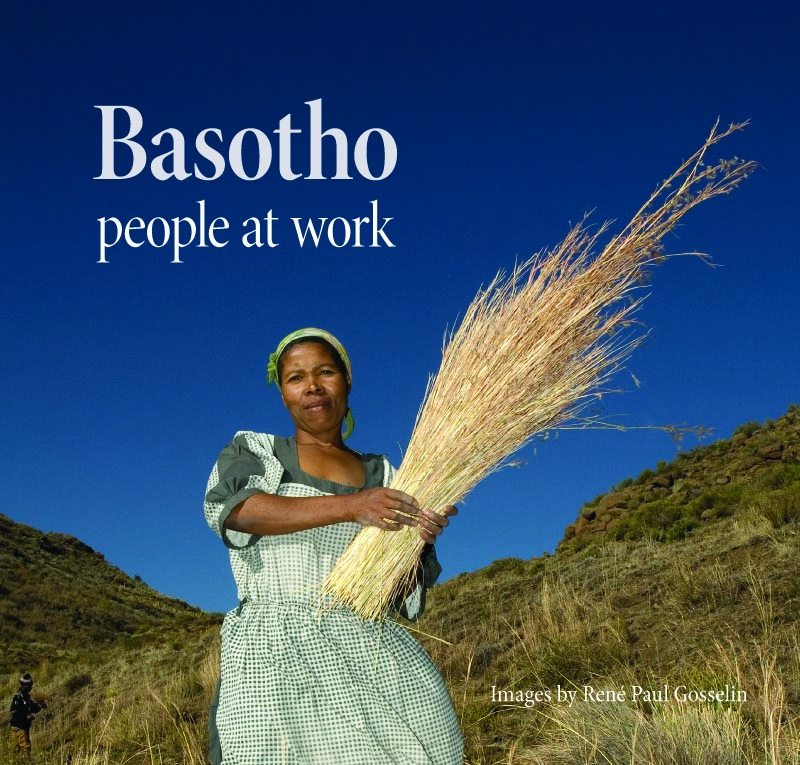 There was no great plan or ‘skeleton’ of my book. In about the year 2004 I began to collect images and categorised them into various aspects of life in Lesotho; Transport, agriculture, industry etc.

These themes were all put together into a very rough mock-up.The software for this cost 12 quid in London. Being a trader at heart, my first thought was for sales material to help sell the project.

One miserable winter day in June 2009, having nothing better to do, I went to the book launch of “Then and Now”. This is an anthology of images taken before and after 1992 by South Africa’s top photographers. There I met the editor Riaan De Villiers, of Highveld Press. He edited that book and of course he knows all the contributing photographers. When I showed him my mock-up, he said that we must publish. We did, in November of that year. The skeleton may have appeared somewhere between these two events but it must still be locked in a cupboard.

We spent three months working on the layout of the book. A large amount of time and thought was spent on the format! The 2 dimensional proportions were discussed and thrashed around more that you would think is possible. Then the weight, the number of pages and therefore the number of images. After weeks of cross-thinking we were able to look at the selection of images. I think this was only in September and we had to be on the shelves in November! Riaan re-designed his office, juggled around his staff and installed special daylight balanced lighting so that we could re-grade all the “RAW” files of the images together and not farm out. He did most of it at night, un-disturbed by staff and the nuisance of light filtering in though special blinds had been installed for the project.

At last we could begin the final selection of images. We still had 200 (out of thousands) and needed to reduce the number to about 80. Pages, weight, rhythm, tedium attention span; I had no idea that these things were so important in a book of pictures. We took two weeks working with one of the top book designers in South Africa, Tim Sheasby, to put the book together and find it’s “handle”. Difficult to describe the feeling on that last day of October when the final Pdf file was set via FTP to Lawprint in Midrand. The excitement did not abate as Riaan and I visited the printer daily. We were to check each batch of “pulls”; the eight page – A1 sheets pulled from the giant off-set litho Leidenburg 12 station printing press. Each pull was carefully scrutinised by the master printer and checked in great detail. It appeared that Riaan grading of the images had been precise; only very slight adjustment of the “blacks” was required before the presses were set in motion for the main run.

A week later the first books were in our hands with that unmistakeable ‘fresh-off-the-press smell’.

Basotho People at Work was in the shops in November 2009, as planned. 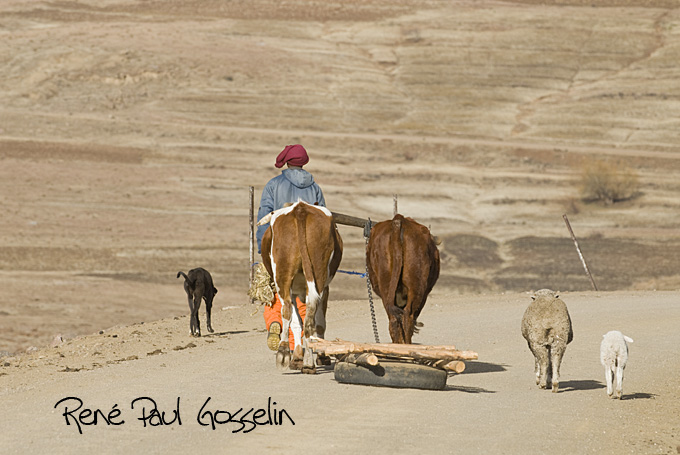 About the Book ~ Basotho People at Work

FOR THE best part of a decade, businessman turned photographer René Paul Gosselin has been increasingly drawn to the remote mountain kingdom of Lesotho.

Gradually, he has learnt that, rather than chasing people and scenes, he should ‘wait quietly by the roadside’, and his subjects will eventually arrive by themselves.

This approach has resulted in a stunning set of photographs depicting the lives of a people who, while fundamentally at peace with themselves and their environment, are constantly at work: ploughing, reaping, threshing, winnowing, milling, weaving, and tending their livestock.

They include images of a gathering of hundreds of Basotho horsemen in the remote central highlands, held under the auspices of their paramount chief, to discuss grazing rights and other vital land use issues – the first ever taken of this spectacular annual event.