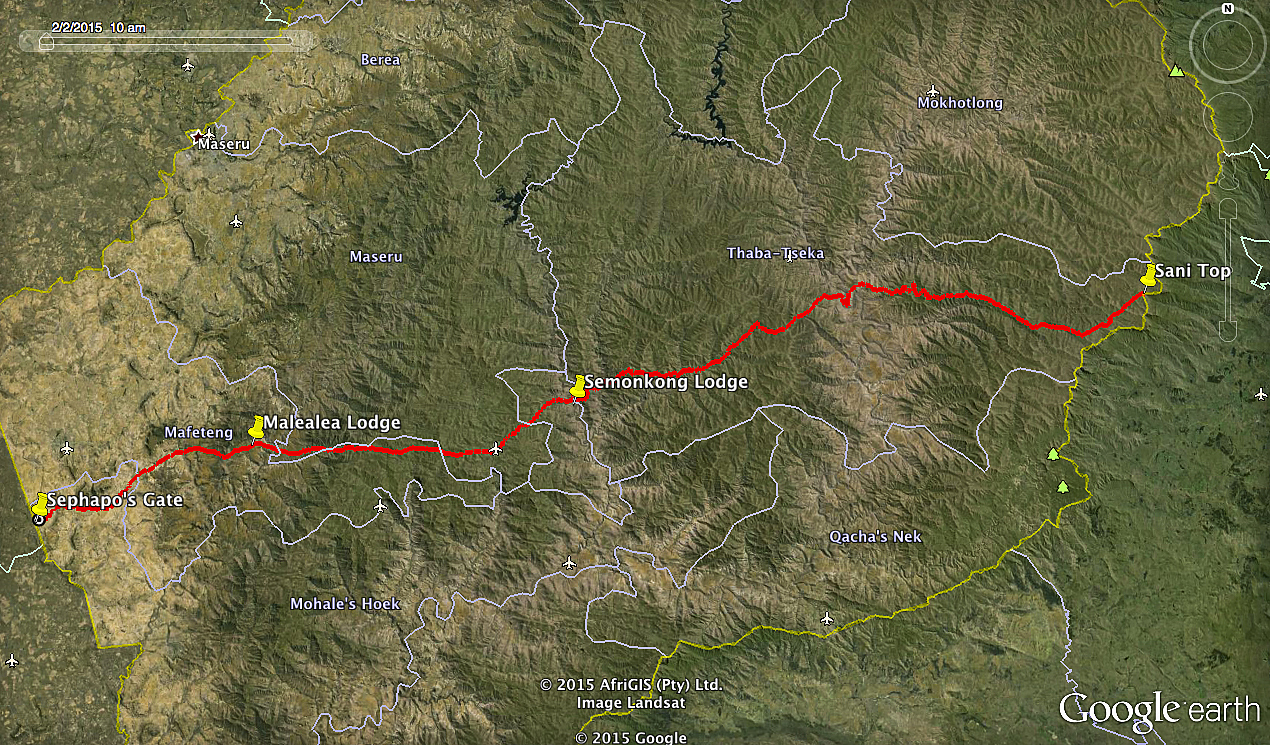 Being an account of the complete 300 km crossing of the country, on foot, from west to east of four hardy hikers and their guides.

And so the voyage commenced. The Border Post of Sephapo’s Gate at 10.00.
Four hikers, four guides and eight ponies all reached the border from Malealea Lodge at the same time and by different routes, the hikers by car and the guides on horseback. We would all return to the Lodge. It seemed like a futile aller-retour but the whole trip has to be done the right way; on foot from one side of Lesotho to the other. No cheating. Malealea is our first stage rest camp.
Photographs for the sponsors and for fun; the local Deputy Chief of the border police decides to join in the foray, I think he really just wanted a promotional tee-shirt from our sponsors Kameraz and Fujifilm. Good publicity because all the tourists will see him at the border.
The Navworld pony steps up to the camera to let us know that he is looking after the spare Garmin GPS 62. The other two are in our pockets ready to start tracking.

A one hour tedious trek along the hot dirt road from the border and we finally get across the N2 tarred Main Road South, into the Lesotho countryside and find the bridal paths that we will be following for 300 km.

The pecking order is established for the first day; our two ladies Ansa and Dawn get to know each other and fly off in the lead, chatting away merrily. Mick and I hold back and try to calm the rhythm which at over 5km/h is too fast. The guides soon become accustomed to our speed and synchronise their halts for rest and watering with ours. Ntate Ramphe, the chief guide knows the country well. He has done parts of this trip many times with hikers, usually from Malealea to Sani pass but never the whole route. Ntate Kanono, Michael Motlomelo and Jeff Mojalefa are all experienced guides and horsemen. They are all riding horses and guiding the four packhorses which carry the bulk of our baggage. We are “slack packing”.

First Camp; Ha Moletsane is a village with primary and high schools and we camp in between the two. The camp site is on the foundations of the old trading post of Danny Bothma, a very well know personality in Lesotho. The local people talk about the Bothma family with endearment but all that remains of the commercial complex are the concrete bases, a grain silo and a few water dams. The long drop toilets which have been taken over by the adjacent local primary school are a good introduction to the local facilities; a new experience.

Day two takes us across the land of dongas. Some of these are 20 metres deep and getting around them extends our route. Ramphe has to take paths that the horses can handle.

The second camp site appears after six hours of marching, around the bend in a river, like an oasis in the desert. The river is still flowing despite a few weeks of drought, past a sweeping bend and sandy beach, perfect for the tents, under the swirling arms of a weeping willow (Salix Babalonica). We are on a small tributary to the Mantekoane River at Ha Moeaneng (The place of Wind). There is not a breeze in the air. Swimming and cooking and a little red wine is lost in eight thirsty companions.

The climb, on the third day, up to Ha Tsoete (The White Place) is a small training for the weeks to come. A hard climb for us but not for Mick who arrives at the summit without a bead on his forehead. Konono leads the group now, something we will see often; his cavalier silhouette on the skyline of our next ascent. From there on it is mostly downhill although it never really is in Lesotho. Today was another short day; only 16 km to Malealea lodge. Some treatment for our first blisters.

The peaceful, organised and well established accommodation at Malealea Lodge, Pony trekking and Mountain Bike Centre, this time felt especially precious. Everyone has sore feet, mainly due to the searing heat of the first three days. Cold water dips, long sleeps, afternoon beers, bandages and bravado about the first days, mixed with some apprehension about the next two weeks in the real mountains. The batteries are charged on the Fujifilm cameras, the Garmins and the hikers.