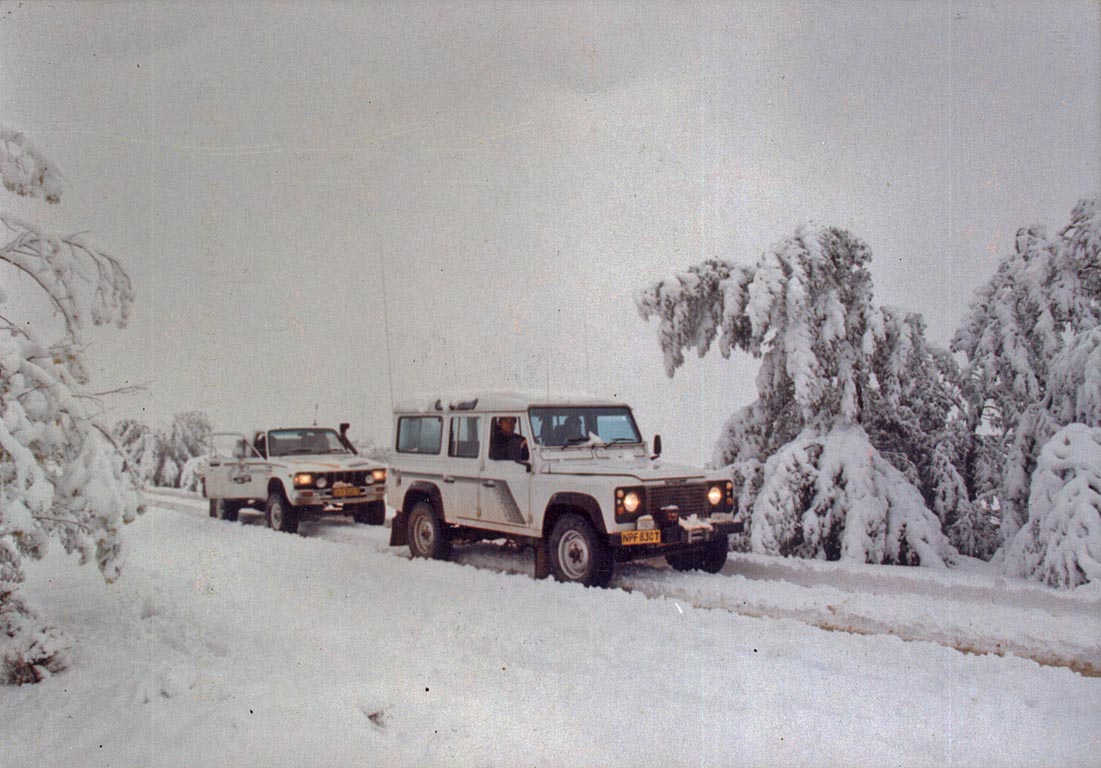 We all wanted to do a Great Off Road Trek. We were comfortable in Mathubathuba and the girls Gaëlle and Gwendolyne, were less so in their SJ410 Suzuki. Lesotho was the original idea for this groot trek but at the time the Basotho Government was full of diplomatic shit and we could not get a visa to go into the mountain kingdom. So we planned to go all around it. And we did, off the tar where ever possible.

But before all that we had to complete the first leg of our trip: The Fika Patso week-end with loads of friends and the  Sentinel Mountain Drive. Well you can see the weather that awaited us on the first morning. Land Rovers and Suzukis went up through 1m of snow without flinching. The same cannot be said for other more macho brands. On the higher stretches the snow was as high as my wheels but the Suzy just never seemed to have a problem.  Climbing up a very slippery slope just past the Overhang Krantz, most the cars slipped over to the side of the road, scrambling for chains and pick-axes. The girls in their Suzuki, unaware of the unofficial stop-over, took the gap and flew past everyone to take the lead position. There were some very red faced Toyota and G-Wagon drivers. Especially as Gaëlle only passed her driving license the previous month!

After that, a complete tour of the enclosed country, driving as close to the border as possible. Very close in some areas… and always a ball of fun.

From Golden Gate the going is mostly tar until Fouriesburg where, from the Caledon Poort road you can find the gravel border road. This comes out halfway to Ficksburg. There are now military roads going through to Ficksburg but you are supposed to have permission to use these. After Ficksburg at Peka you can follow the border on gravel all the way to Maseru Bridge. Turn right there. There is a dirt road from just outside Maseru Bridge that takes you all the way to Hobhouse via De Bruyn Siding and with great views of the Qeme Plateau in Lesotho. From Hobhouse we found it necessary to keep on the tar until Wepener from where great gravel roads lead all the way down to Zastron or even further down to Sterkspruit.

It was here that in 1901 Deneys Reitz and his small band of friends met up fortuitously with the commando of General Smuts who was also heading for a dangerous adventure into the Cape. They were all very lucky to come across a Mnr. Louis Wessels, a local personality and Commandant of a hundred local burgers who lead them through some tricky passages between the English Camps. The Wessels family still farm in the area.

From there on we took to the road towards the border, (which is now a great wide tar road) and turned off right a few yards from the Telle Bridge Border Post towards the Telle River.

This exquisite road takes you along the border with Lesotho for some kilometres and you really feel the life of the Basotho with one foot in each country. Villagers wander across the river and herdboys play on either side without concern. The road then climbs up over Lundeans Nek (2226m) not forgetting to salute the most curious Greek  Architecture on the way up:

it’s 64 km down this magnificent pass to Mosheshe’s Ford, on the Kraai River,where King Mosheshoe was supposed to have driven back the herds of cattle that he re-captured from the marauding Baphuti from the Stormberg in the Eastern Cape.  Keeping left at this junction takes one onto the 27km gravel road to Rhodes.

A stop over at Rhodes is really unavoidable as the village is so far from each end of the dirt roads that all lead there. However for some reason, our little group decided to push on up and over the highest road pass in South Africa; Naudesnek (2499m) and on to Maclear. Somehow our (my) navigation was off by a couple of hours and we drove to whole pass in the night, freezing and quite full of concern. Not an advisable exercise. Pot River Pass (1755m) follows on from Naudenek and takes you down past King’s Kop to the back end of Maclear.

At that time, the worst road in  Southern Africa, according to all those who dared to drive it was the road from Maclear to  Mount Fletcher. Every few kilometres, the girls called on the radio for a stop as the din in their plastic topped Suzuki was just too much. After a while we gave them the Land Rover and took the wheel of the little red devil. After 20 minutes we called them and said “That’s enough! ~ Never again!” A terrible piece of road in those day but quite a pleasure to drive today, with well designed curves and plenty of width. You can still see many pieces of the old road as you cruise along this new highway.

The following sections of the trek are just as picturesque but quiet long uneventful and good roads: Matatiele to Swartberg on good gravel and then tar to Himeville. There on my excellent favourite gravel road via Taylors Ridge turning right into the Kamberg Nature Reserve and exiting between Draycott and The Nest on the Bergville Road. You can go around the back of the Woodstock Dam on Gravel but we elected to head straight up to Olivierhoekpass (1740m) passing the great Sterkfontein Dam and then left up to Golden Gate and so closing the circuit.

If you do go around the Woodstock Dam, you might meet this creature: